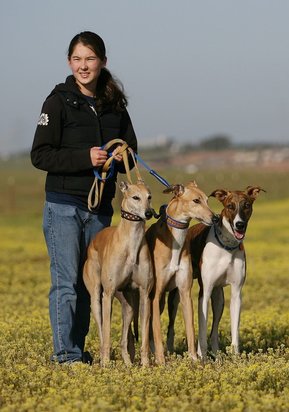 (c) Dave Mills
Stout-Hearted Hounds began in 2005 after I acquired my first Greyhound, a retired racer named Olde Ecstasy or just "Cali" to her friends. Cali was not only the beginning of my interest in sighthound breeds, but also the beginning of my passion for sighthound field sports. With Cali, and my second Greyhound Humer, I became acquainted with amateur racing and lure coursing. Needless to say, I became hooked on the breed and the sports.

In 2007 I acquired my first Magyar Agár from Hungary, a male named Aranyági Utonálló Fenség or just "Gil" to his friends and family. Gil was an amazing introduction to the Magyar Agár breed, which has since become my primary focus as a breeder/exhibitor. He is a once-in-a-lifetime dog; not only an amazing athlete but a superb companion and friend to everyone he meets. Through Gil I became hooked on hare coursing, both competitive and informal. In 2011 I bred my first (and probably the country's first) litter of Magyar Agár puppies.

In 2011 I acquired my first Greyhound puppy, an English coursing bred bitch named Hattie Peach. Hattie proved to be a fine coursing dog, but a career-ending injury prevented me from ever breeding her. Just when I thought that my involvement in the breed was at its end, I acquired my first American coursing bred Greyhound, Point Breeze Precious Princess "Dagny." With Dagny I hope to always have at least one Greyhound in my home, and to perpetuate the Point Breeze bloodline. 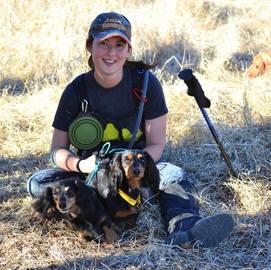 (c) Laura Stutts
My involvement with Dachshunds goes all the way back to my childhood. As a pre-teen I adopted a standard smooth male named "Weeny" when he was approximately 14 years old. Although he was old, nearly blind and mostly deaf, Weeny was a joy to live with and absolutely stole my heart with his loyal and devoted nature. From that point forward I have been a huge fan of the breed.

After Weeny, I did not own Dachshunds for several years. It was not until 2009 that I acquired my first AKC registered Dachshund, a mini longhair male that I named Leeroy. With Leeroy I learned about field trials and quickly became hooked.

I co-bred my first litter of Dachshunds in 2012, and a second litter in 2015. From my first litter I kept a male that I named Blackfoot, and from the second litter I kept a female named Fala (who I now co-own with a friend). Although I love the breed and always will, I have decided not to continue breeding Dachshunds myself, but will work closely with others who own dogs of my breeding.